Although fish often get more attention, seabirds are also an important component of the nearshore ocean ecosystem. The central Oregon coast is a hotspot for seabird nesting and foraging. This hotspot is one of the reasons why the Cape Perpetua Marine Reserve includes a Seabird Protection Area which restricts the harvest of forage fish known to be a primary food source for many seabirds.

Beyond marine research conducted by the ODFW Marine Reserves Program, the Cape Perpetua Marine Reserve and surrounding area has attracted additional research that is helping us learn more about the nearshore ecosystem and informing ocean management. Dr. Rob Suryan, from Oregon State University and Joe Liebezeit, of the Audubon Society of Portland have been involved in conducting seabird research in and around the Cape Perpetua Marine Reserve. Rob and Joe describe their respective research projects in two guest news posts. In addition, Cape Perpetua was a primary study site for a recently completed winter seabird and marine mammal pilot study. This joint research effort between ODFW, US Fish and Wildlife, Crescent Coastal Research and The Nature Conservancy characterized distribution of seabirds and marine mammals during the winter months.

Western gulls are a familiar sight on beaches, headlands, building roofs, harbors, and are almost everywhere one looks along the Oregon Coast.  They are smart and tenacious birds that appear to be well adapted to congregating in parking lots and stealing food from humans.  In reality, many western gulls feed on forage fish in coastal Oregon waters and nest on offshore rocks and islands, including within the Cape Perpetua MR/MPA.  It is especially during the spring and summer nesting season that breeding birds must secure enough energy rich prey to feed their rapidly growing chicks.  We recently initiated a study of western gulls nesting at a colony in the Cape Perpetua MR/MPA south of Yachats to determine their at-sea distribution, marine and terrestrial habitat use, and reproductive success (number of chicks raised per pair).  This research in the Cape Perpetua MR/MPA is part of a broader effort to study the distribution patterns and marine habitat use of seabirds along the Oregon coast and assess potential conflicts with offshore renewable energy development.  We are using gulls as representatives of seabird species that feed on fish in surface waters and fly at varying altitudes over the ocean while searching for food. Lessons learned from land-based wind facilities are that proper siting of wind turbines outside of migration corridors and high use areas greatly reduces impacts to birds.

During the 2015 breeding season we attached micro-GPS loggers to gulls nesting at the Cleft-in-the-Rock colony south of Yachats.  The GPS loggers recorded latitude, longitude, and altitude every two minutes.  We recaptured the birds after one to two weeks to remove the loggers and download the data.  We also measured gull reproductive success for comparison with other seabird monitoring efforts conducted by the Audubon Society of Portland and U.S. Fish and Wildlife Service within the Cape Perpetua MR/MPA.

Western gulls carrying GPS loggers foraged in offshore marine habitat and in intertidal zones, rather than inland habitats.  Gulls primarily stayed within the western boundary of the Cape Perpetua MR/MPA (approximately 3 miles), but did travel outside of the MR/MPA to the north and south.  Gulls did not travel more than 1.3 miles inland and only crossed over Highway 101 in Alsea Bay.  The gulls also showed high foraging site faithfulness and often returned to the same areas to feed and rest.  Common intertidal sites that birds visited included Yachats Ocean State Park and Neptune State Park.  Gull flight heights were often less than 50 m (164 ft) over water and up to 300 m (984 ft) over land.  Overall the Cleft-in-the-Rock gull colony was quite successful raising chicks this year with an average of 1.5 chicks fledged per nest.  In 2016 we will increase our western gull tracking efforts in Cape Perpetua MR/MPA and expand to other areas along the Oregon Coast. 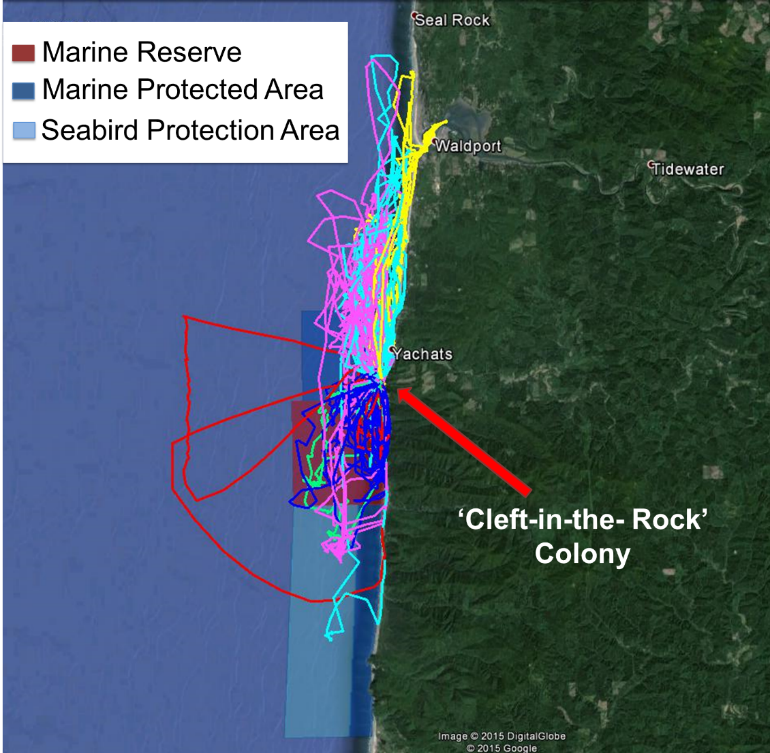 Photo: Tracks from 6 western gulls from the Cleft-in-the-Rock nesting colony carrying micro-GPS units while foraging within and adjacent to the Cape Perpetua Marine Reserve/Marine Protected Area.

In 2014, the Audubon Society of Portland initiated a citizen science project in Oregon’s largest marine reserve/protected area at Cape Perpetua targeted on the local seabird population.  Other partners on this effort include the U.S. Fish and Wildlife Service, Oregon State University (OSU), Sea Lion Caves (a local business), and the Oregon Marine Reserves Partnership. The goal of the project is to build a baseline of information that will increase our knowledge of seabird use in the Cape Perpetua Marine Reserve/Marine Protected Area in comparison with other seabird colonies while also promoting recognition of Oregon’s marine reserves through local community participation, outreach, and education.

As part of this effort we are monitoring the “breeding success” (ability of adults to successfully produce chicks) of Brandt’s and Pelagic Cormorants that nest on rocky cliffs along the coast.  These species are the most common nesters in the Cape Perpetua area and depend on forage fish and other prey items in nearshore waters.  The Cape Perpetua MR/MPA includes a “seabird protection area” which specifically protects forage fish species including Pacific Herring, anchovies, and Pacific sand lance. These small fish are a critical link in the ocean ecosystem providing a primary food source for many top predators like salmon, marine mammals, and seabirds. 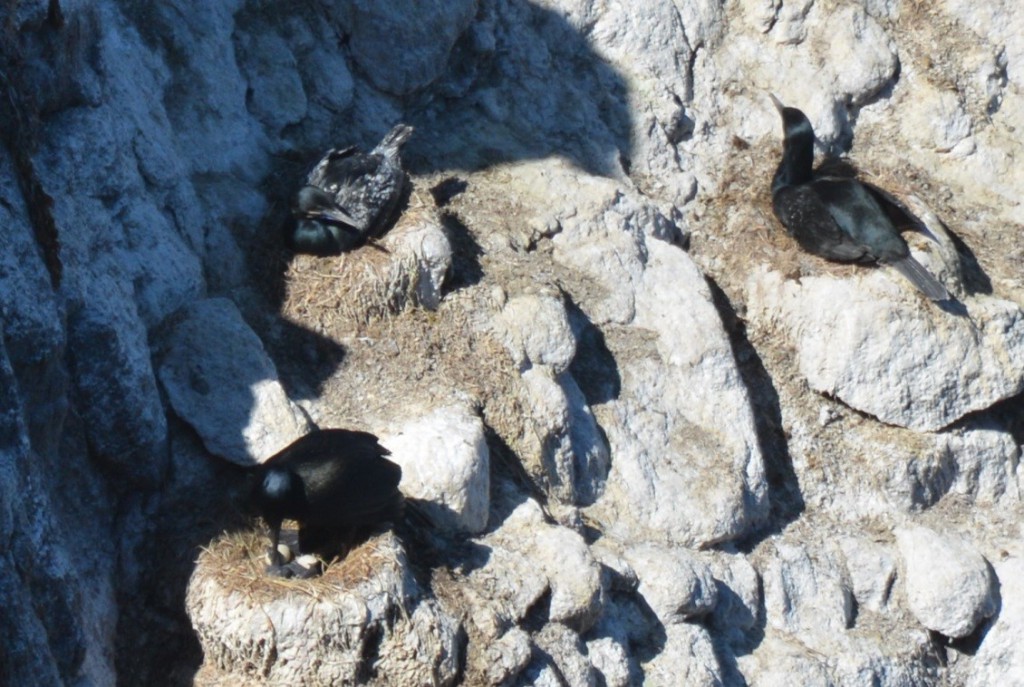 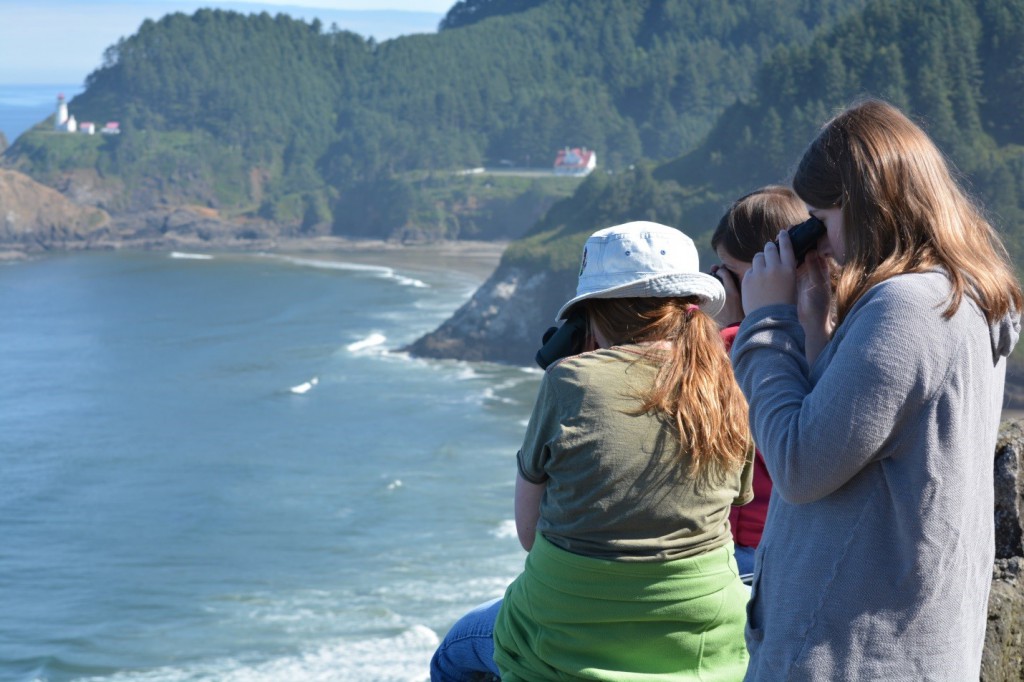 We are partnering with the seabird oceanography lab at OSU to compare our findings to a site at Yaquina Head outside of the marine reserve system. We hope this effort will help us assess how effective the marine reserves are in supporting the local marine food web, from the bird perspective. This complements work by the ODFW as they are focusing ecological monitoring on seabed habitats and associated invertebrate and fish communities. Findings from our first two seasons indicate quite variable breeding success with Brandt’s Cormorants having higher breeding success in 2015 compared to 2014 across sites (Fig. 1) while Pelagic Cormorants appeared to have much lower breeding success in 2015 (Fig. 2). Rhinoceros Auklet and Pigeon Guillemot usage of Sea Lion Caves has remained consistent across years.  Read the report for detailed results . Ultimately Audubon hopes that the new marine reserve protections will support healthy fish populations supplying seabirds with ample food to produce more and healthier chicks. 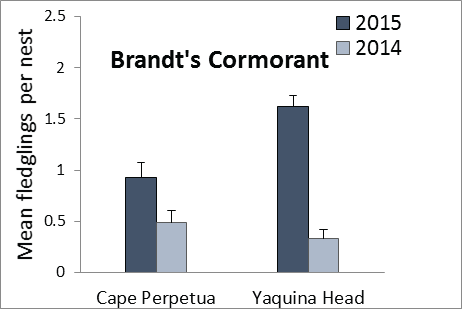 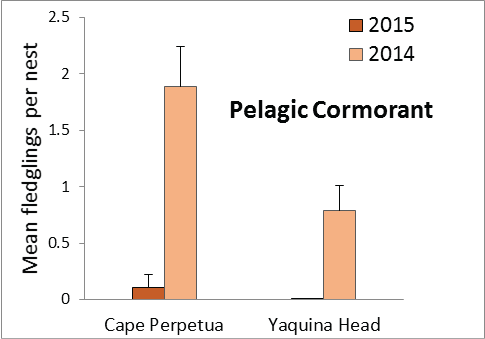 In this project we have the unique opportunity to reach many of the 100,000 visitors that go to Sea Lion Caves and to nearby Heceta Head Lighthouse annually.  Sea Lion Caves is the largest sea cave in the U.S. and is home to hundreds of sea lions as well as crevice nesting seabirds including the Pigeon Guillemot and Rhinoceros Auklet.  Sea Lion Caves management has provided our volunteers access to the caves to monitor abundance of these seabirds nesting in the caves that would otherwise be difficult to observe.  We have engaged with hundreds of visitors as we conducted the seabird surveys helping raise awareness on Oregon’s marine reserve system and seabird conservation. 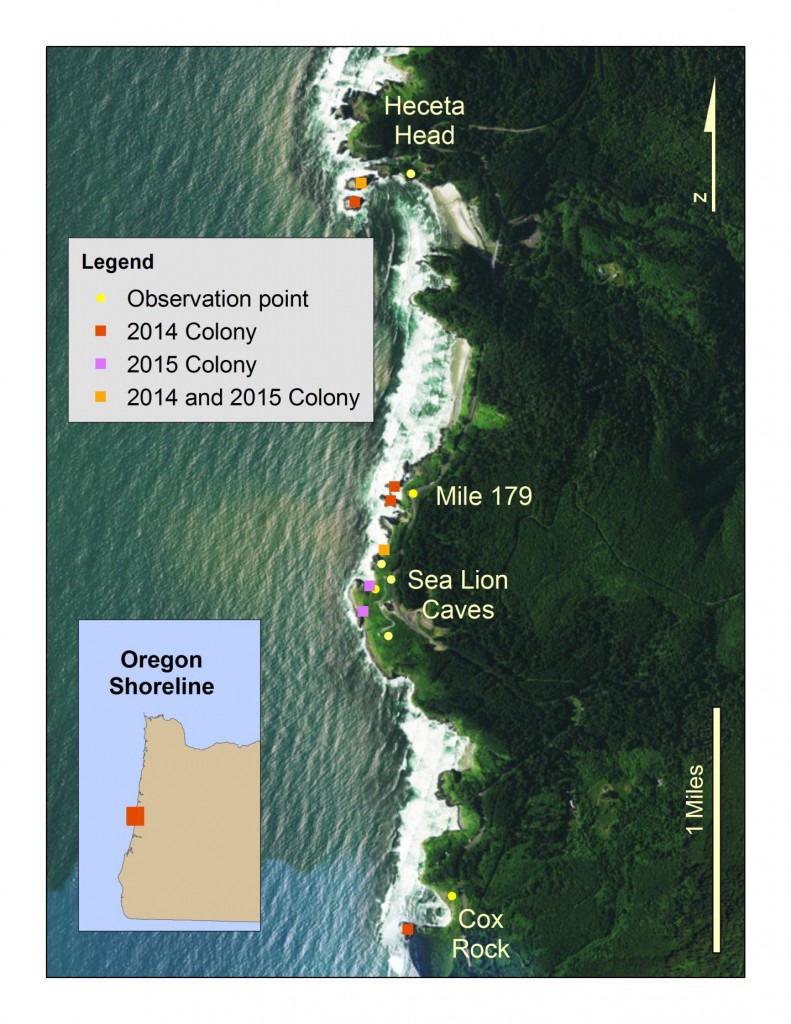 Over 20 dedicated volunteers participated in this citizen science effort contributing hundreds of volunteer hours.  A U.S. Fish and Wildlife Service intern and Audubon contractor, Amelia O’Connor, took the lead in establishing monitoring plots and coordinating the volunteers.
If you are interested in participating in this project please contact Joe Liebezeit (jliebezeit@audubonportland.org).

Seabird and marine mammal occurrence in Oregon’s nearshore environment has been well-characterized during late spring to summer time periods.  Nearshore bird and mammal abundance and distribution differ between spring, summer, and winter seasons; however, few surveys have been conducted during winter months in Oregon’s nearshore waters to quantitatively document those differences.  To help fill this data gap, the Oregon Department of Fish and Wildlife (ODFW), United States Fish and Wildlife Service (USFWS), Crescent Coastal Research and The Nature Conservancy (TNC) collaborated to conduct a pilot project to survey marine birds and mammals in Oregon’s nearshore environment during the winter season. The project goal was to test and compare boat-based transect, shore-based point survey, and aerial survey strip transect methods for surveying marine birds and mammals in winter. The boat and shore-based surveys were conducted by Crescent Coastal Research, and the aerial survey was conducted by USFWS.  Cape Perpetua was one of the primary study sites for this pilot project (Figure 1). 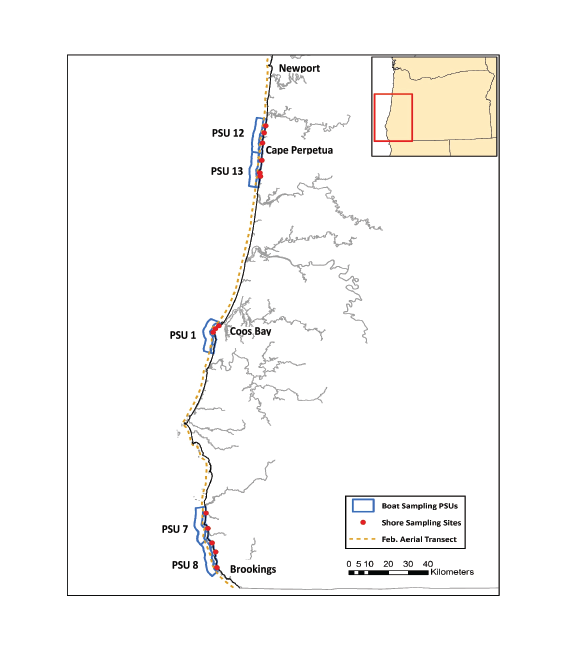 The aerial survey documented differences in overall bird counts along the entire coast, and clearly demonstrated differences between winter months and the beginning of the spring migration when high numbers of loons and grebes appear along the coast (Figure 2).  The boat and shore surveys provided much more detail on individual species and allowed examination of the differences in species composition between sites, survey methods, and seasons (Figure 3). 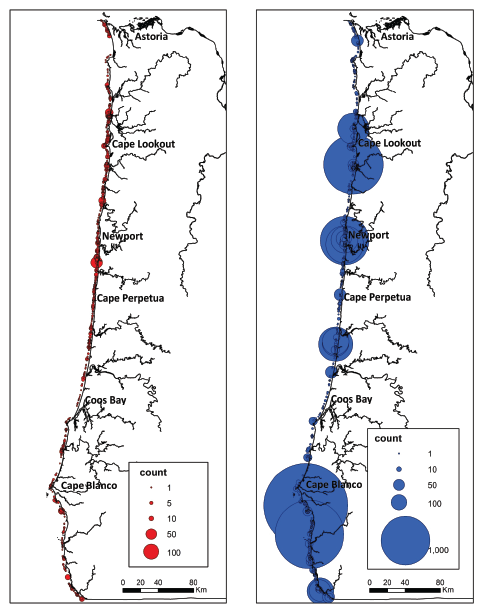 More species were observed from the shore survey than boat survey because several species, especially loons, grebes, and some duck species generally occur too close to shore to be seen from a boat, but are readily surveyed from shore.  Species composition also differed between summer and winter with more petrals, phalaropes, and terns in summer and more grebe, loon, and gull species in winter.

The use of three different survey methods (shore-based, boat-based, aerial) highlighted similarities and differences in observed species composition that can result from biases particular to each survey method.  The aerial survey produced significantly different results from the boat or shore surveys.  However, comparison of boat and shore surveys has provided evidence that winter shore-based surveys along the Oregon coast can provide a viable alternative to boat-based surveys to monitor nearshore (~ 1 km from shore) seabirds.  Not only do the shore surveys appear to capture the same core bird community observed in the boat surveys, but they provide the added bonus of sampling very-nearshore species not typically sampled by the boat surveys.  An important advantage of shore-based surveys is the reduced fiscal and logistic costs as compared with boat-based surveys, especially in the winter when Oregon’s stormy weather makes at-sea work challenging and potentially dangerous. 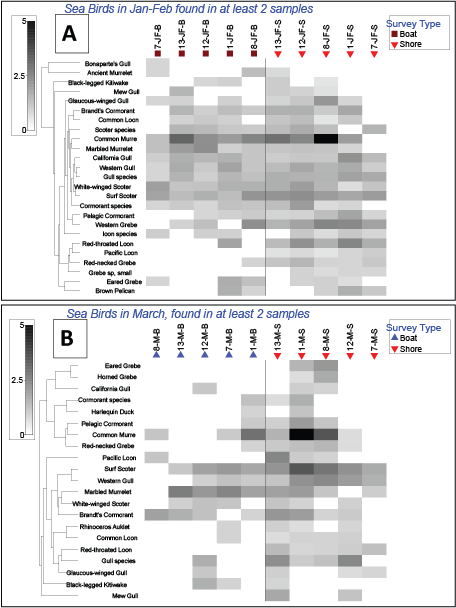