Measuring a fish via video isn’t some bizarre concept dreamt up by Silicon Valley computer whizzes. This technique has actually been used in Oregon, by Oregon Department of Fish and Wildlife (ODFW) researchers, for the last two decades. So, why would researchers even want to measure a fish via video?

This is a two part answer. In marine reserves science, changes in average fish lengths is one of the early indicators of an ecological response to closed area management. Plus, fish lengths provide valuable data to scientists who track fish populations, giving them an estimate of wild population health. For example, is the population full of small juveniles who haven’t yet hit a reproductive cycle or is it full of large, old reproducing fish? Both of those pieces of information are important to fisheries management, telling researchers a story about a populations’ long-term sustainability. 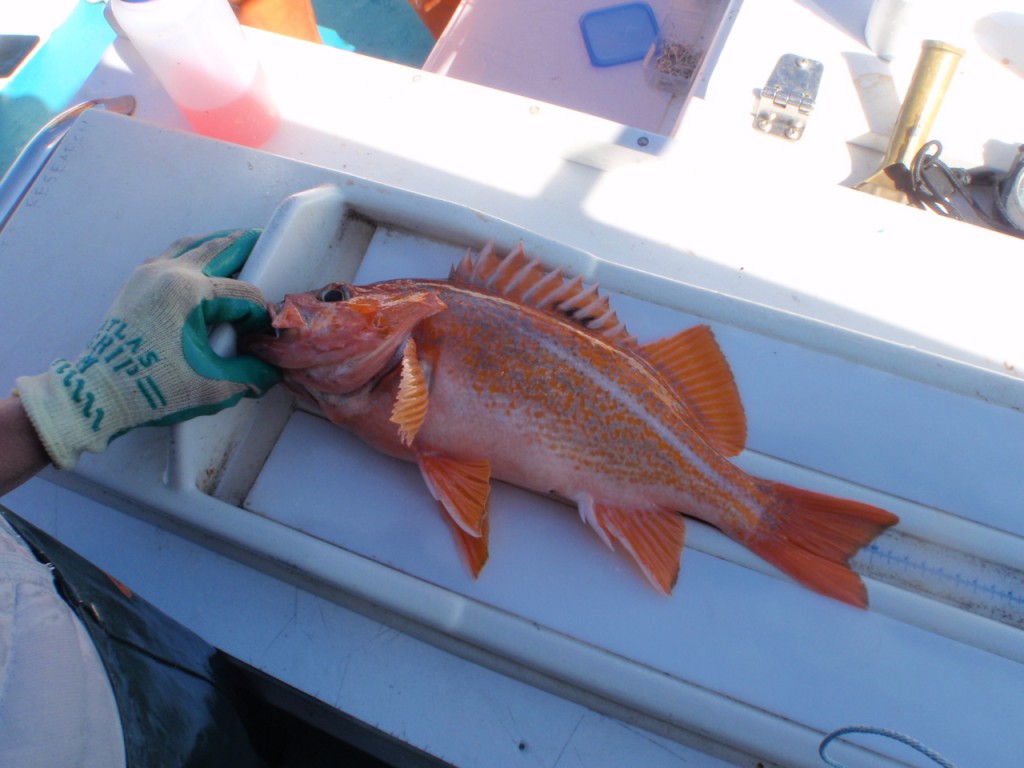 Fish lengths are commonly collected via a variety of tools such as hook and line or trawl surveys. However, these methods are extractive and tend to only catch certain species.

Two decades ago, ODFW researchers started using underwater video systems as a non-extractive and potentially cost effective way to collect data on abundance of fish, invertebrates, and habitat types (click here to learn more about ODFW’s marine video research). This opened up a whole new world of underwater research, allowing for cost-effective collection of valuable habitat data and abundance information without removing the fish from their environment.

Now, ODFW researchers are adding a new tool -stereo video- to these underwater video systems to enable researchers to not only count, but determine the size, of the fishes seen on video. This technique is done using a video setup that uses two cameras with overlapping fields of view, carefully calibrated with basic geometry, to get precise fish lengths. 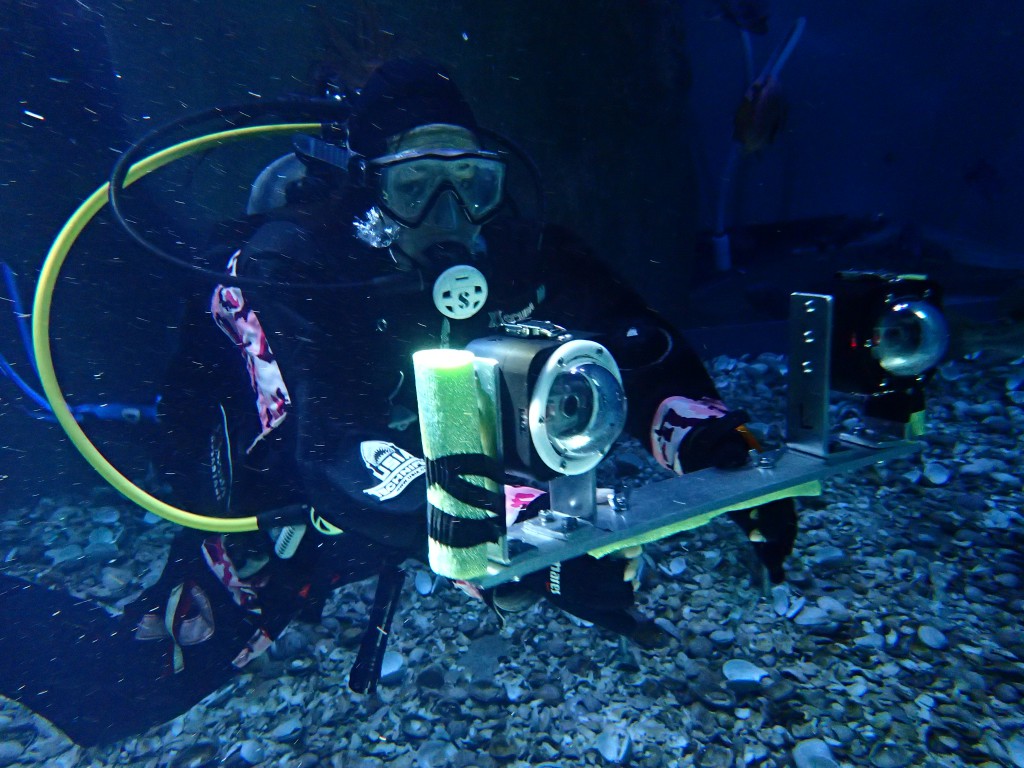 Photo: Testing the stereo camera at the Oregon Coast Aquarium.

“Stereo video cameras allow us to collect fish lengths to the nearest centimeter. A centimeter doesn’t seem like much but, it makes a big difference in fisheries science,” explains Ashley Knight, a researcher in a joint position with ODFW and Oregon State University.

Stereo video research was first pioneered in Oregon by renowned ODFW fisheries researcher Bob Hannah. Building on Bob’s research and those of collaborators in the RACE Division at the Alaska Fisheries Science Center, the ODFW Marine Reserve Program is incorporating the stereo approach to two of our long-term monitoring tools: video lander and SCUBA surveys.

“Stereo video cameras allow us to collect fish lengths to the nearest centimeter. A centimeter doesn’t seem like much but, it makes a big difference in fisheries science”

Currently, the Marine Reserve Program uses low-cost “mini-landers” equipped with GoPro™ cameras to gather data on fish abundance and the habitats they occupy. Adding stereo capacity to these small landers will allow us to gather data on the size of the fish seen in the video as well. Stereo gear is also being developed for our SCUBA surveys. The goal is to see how fish sizes estimated using the stereo cameras compares to size estimates made by scientific divers.

“We might find that the stereo camera system is better at estimating the size of the fish, but a diver is better at finding the fish, especially for cryptic species like Cabezon. So we might end up needing both in order to produce the most robust monitoring tool,” says Dr. Brittany Huntington, Ecological Monitoring Project Leader for the ODFW Marine Reserves Program.

We are currently completing the design and testing of the diver stereo gear to evaluate it and see how well it works. Once testing is completed on the diver stereo system, mini-landers will be reconfigured to hold stereo cameras. Both systems should be ready for open-ocean testing this fall.

Part of the task of monitoring Oregon’s marine reserves is learning about the most current technology and approaches used to survey nearshore marine communities and then adapting our monitoring tools to incorporate these approaches. Building strong tools for long-term monitoring will help us better track the fish populations inside and outside of the reserves and assess how they change over time. Stay tuned for updates on this research and how the new stereo cameras perform.

Updates From the Field 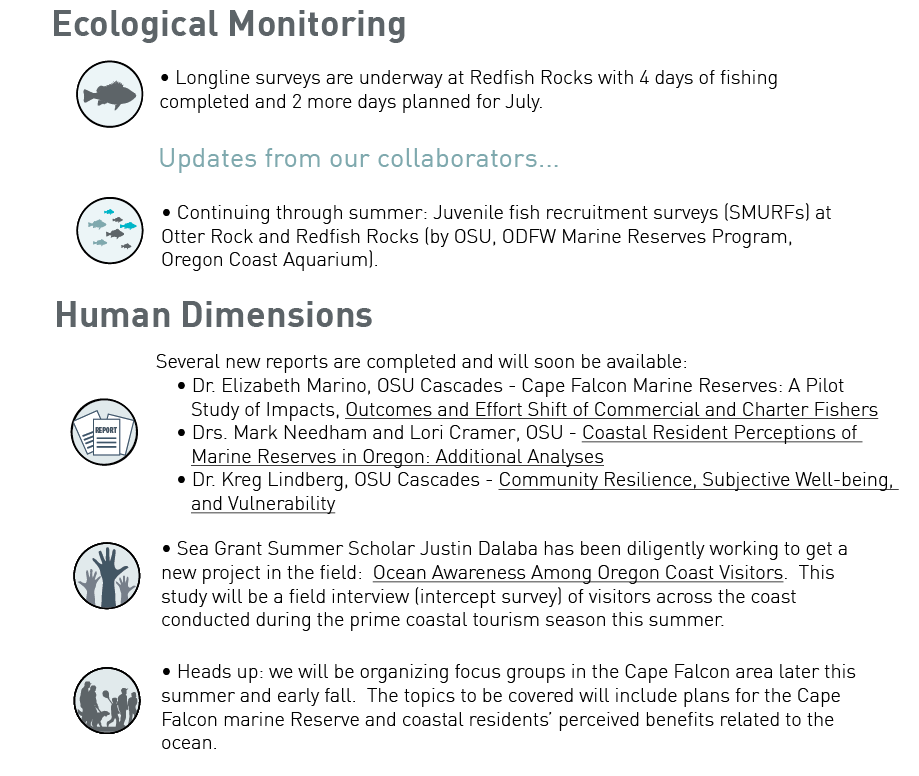