Just like a doctor looks at a patient’s symptoms to diagnose an ailment, we head to the intertidal zone searching for any visible symptoms on sea stars that could be linked to Sea Star Wasting Syndrome. So, what does this disease actually look like?

There are six signs of wasting:

One of the first signs are lesions. Lesions on diseased sea stars appear as white spots that look like the top layer was scraped away. However, a natural part of sea star anatomy is the white spot at the center of the sea star – this is the madreporite. The Madreporite is an opening that sucks in water to help with movement, feeding, and respiration. Also, when see stars spawn, there will be white goop near the madreporite – which is totally normal. To tell the difference between lesions and healthy sea stars spawning check the and see if the white is on top of the star (spawning) or actually part of the sea star tissue (lesion). 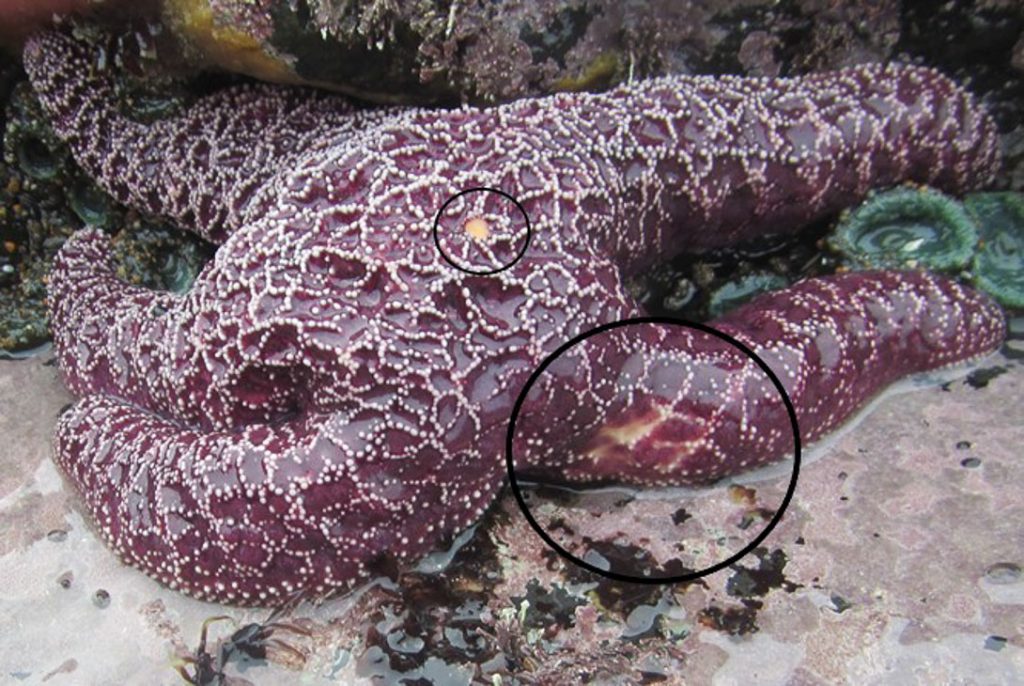 Photo: A lesion on a sea star with sea star wasting syndrome. 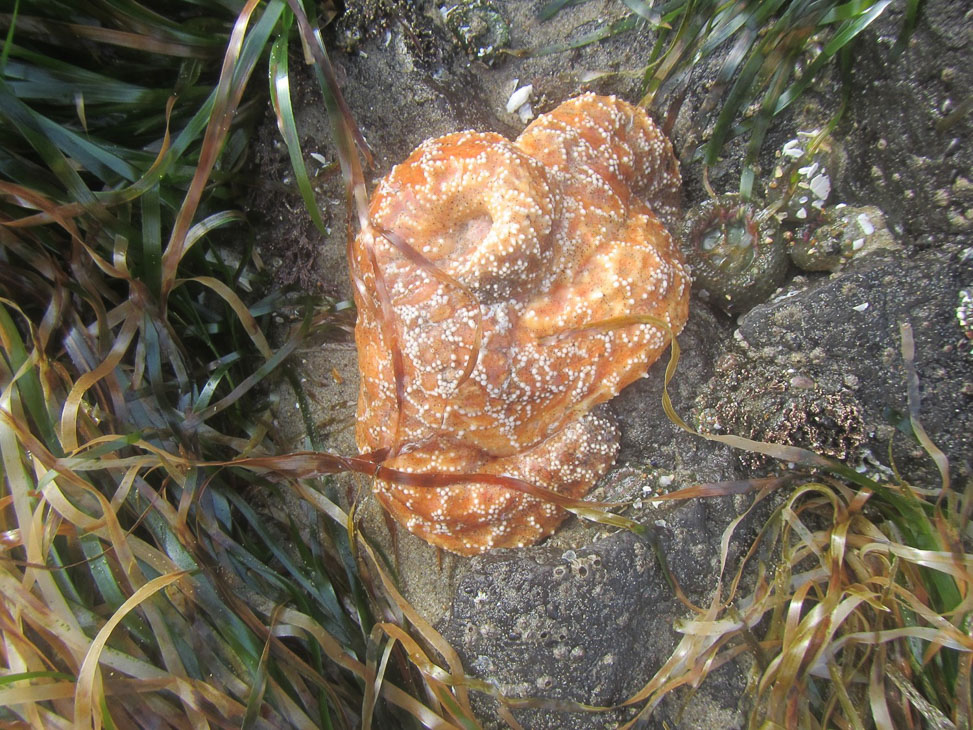 The third sign of wasting syndrome is sea stars that look deflated and flat. This is not to be confused with dehydration, in which they tend to look somewhat dried up. 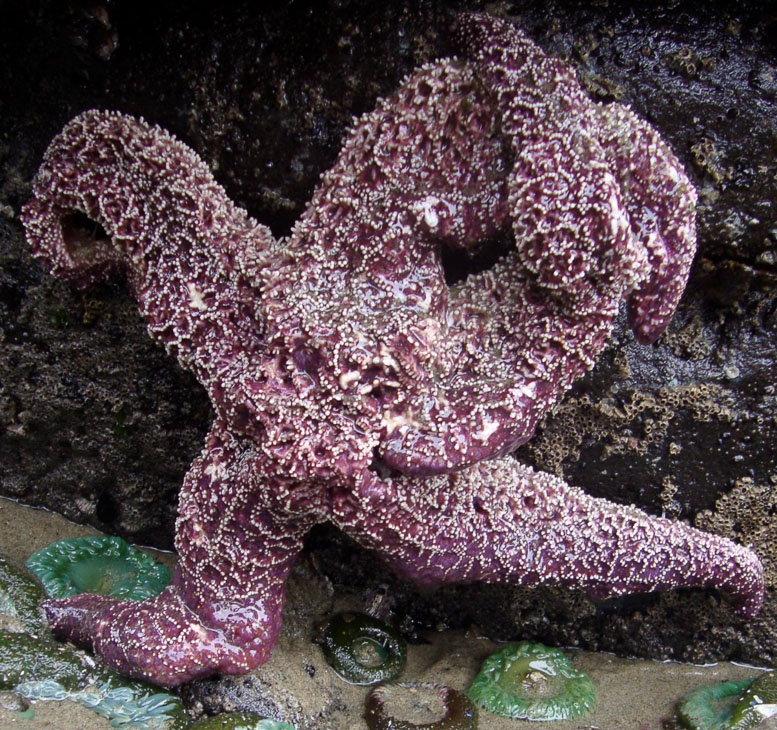 Photo: This sea star is not only deflated but also has twisted arms and lesions.

The fourth, fifth, and sixth signs are more severe symptoms. These are arms falling off, arms losing grip, and the sea star dissolving. When the symptoms reach dissolving the sea star is either dead or approaching death. 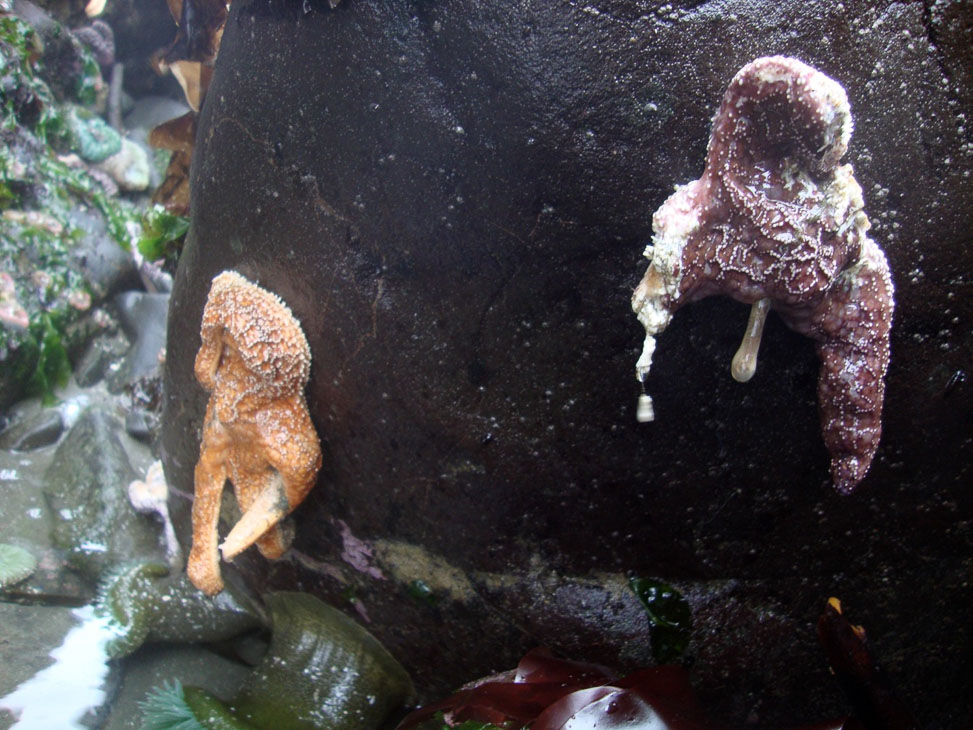 Photo: The purple sea star has three arms missing, is dissolving, and the top arm is losing grip.

ODFW is not the only group to monitor sea star wasting syndrome. One of ODFW’s collaborators, MARINe, uses citizen science to report where healthy and afflicted sea stars are being found. Anyone can download their datasheets, collect data, and then submit it online . If this sounds interesting, there are a few things to note before heading out to become doctors of the intertidal (check out full methods here). Species identification is necessary so be familiar with the local species of sea stars. Size needs to be recorded so bring a ruler or something of known length as a reference. Review this post to familiarize with the types of sea star wasting symptoms. And finally if there are diseased individuals remember to take a picture and send it to seastarwasting@googlegroups.com.

If you enjoyed reading this, be sure to check out similar stories here:
Sea Stars: Tigers of the Tidepools
Summer Sea Star Surveys
Intertidal Survey Series: Research at the Ocean’s Edge