No take of animals or seaweeds. No ocean development.

Beneath the Surface
Rocky intertidal habitats are found along the shore on the north end of the marine reserve. Here you’ll find invertebrates such as mussels, sea stars, and snails as well as a variety of seaweeds. Underwater, the reserve includes the north segment of the Siletz Reef. This is an extensive rocky reef home to many species of groundfish such as canary rockfish, invertebrates such as giant plumose anemones, and seaweeds. In the North MPA, the Salmon River flows out into the ocean providing a freshwater input into the marine environment. The area around Cascade Head is a major upwelling center that creates productive waters that influence areas to the south.

From Land
Visitors have many opportunities for wildlife viewing and other outdoor recreational activities in and around this area. Nearby parks include Roads End and Knight Park. Hiking trails atop Cascade Head afford views overlooking the site. Much of the land around Cascade Head and the Salmon River is protected. Nearby towns and ports include Pacific City, Otis, Lincoln City, Depoe Bay, and Newport.

Planning a Visit?
For more Cascade Head activities, including hikes and viewpoints, visit this activity guide to plan your trip.

The ODFW Marine Reserves Program uses different monitoring tools tailored to each of Oregon’s marine reserves based on the reserve’s size, habitats, depths, prior fishing activities, and other unique characteristics of each reserve.

The Cascade Head Marine Reserve includes complex rocky reef habitats, and experienced relatively high levels of fishing pressure on groundfish before closure. The wide variety of habitats and depths in the reserve provide protections to an assortment of previously harvested fish species. The rocky reef habitats protected within the reserve also extend further south into the South MPA and the comparison areas of Schooner Creek and Cavalier.

Sampling Approach The design and placement of the marine reserve at Cascade Head allows us to evaluate over time how marine species respond to reserve protections — no fishing — compared to areas still open to fishing.

We are using the following tools and sampling intervals to monitor the reserve at Cascade Head based on the site’s unique characteristics.

In addition to these activities, Our Partners at PISCO, MARINe, and UC Santa Cruz are conducting rocky intertidal surveys at the site.

Find out more About the Science. 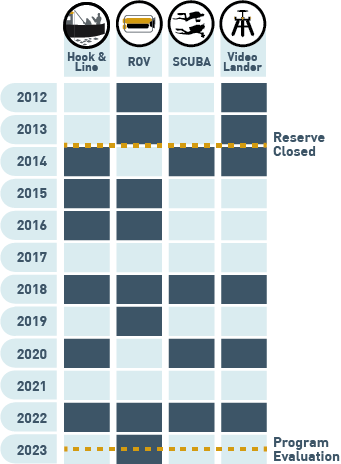 Interested in finding ways to get involved? Or seeing what is happening in your local community?

Our partners are a great resource for getting connected. Find them here. Go →

KEEP UP WITH US

Get the latest updates and research highlights by signing up for our eNewsletter. Go →

Oceanographic mooring deployments and an ROV survey mark the start of the 2022 field season. Read More

We are excited to get back out on the water — spring, sunshine, and research vessel contracts are in the air. See what monitoring surveys are planned at each of the reserves this year. Read More